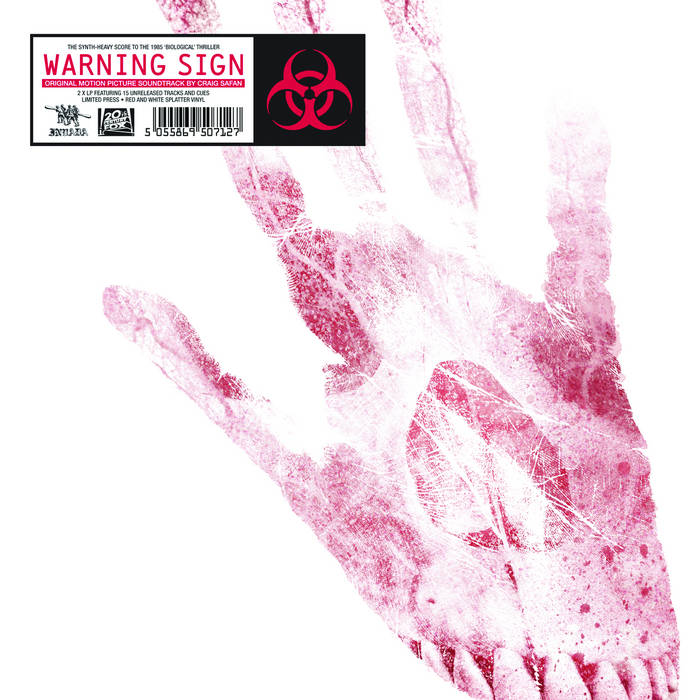 
Invada Records Proudly presents the release of a Synth-Heavy Score from one of the Industry's most Creative Composers; Craig Safan's music to the 1985 "20th Century Fox" Science Fiction Thriller. The score comprises of 14 songs used on the film itself, plus a further 15 bonus unreleased cues and tracks (29 tracks in total).

Famous for his score to the timeless classic The Last Star Fighter, as well as A Nightmare on Elm Street, Part IV and (amazingly) the hit series Cheers, Safan's film music is notable for its clever use of electronics, and Warning Sign is no different. Recorded using a Synclavier Synthesizer - an incredibly expensive piece of kit at the time - the score is fully electronic but no less effective than his orchestral work, and provides an entertaining and futuristic soundscape for the story of a man-made virus that is accidentally released into its laboratory, turning its workers into zombies.

Due to the science fiction and horror overtones, the Synclavier creates an appropriate atmosphere which Safan layers with different effects, from an electric piano that illustrates a desolate location in the film's early stages to the use of metallic effects as percussion for the chemically-affected staff. Safan weaves dissonant sounds to suggest chaos and paranoia, and innovatively synthesises human voices to convey a sense of tortured souls to those infected. What follows is an intense score where the foreboding turns to reality with an eerie and uncomfortable texture, broken only by a beautiful and warm melody for the resolution and end credits, where all is well.

Following on from dark and intense soundtracks such as Cliff Martinez's Drive, and Geoff Barrow and Ben Salisbury's DROKK, Invada Records presents Warning Sign as a Digital Download in a new special edition that features an expanded version of Craig Safan's original 1985 LP program, along with 15 unreleased cues presented as bonus tracks. The score has been newly remastered by Optimum Mastering, and features new artwork by Marc Bessant (Portishead / DROKK etc).


If you wish to purchase vinyl or CD versions of this album please go to our Big Cartel store where you can purchase special collectors editions.